I love shows and showing. Since 28/5/1972 I am infected by the show virus. In 1989 it was the first time I went into a showring with one of our Bearded Collies. Even I was used to shows I felt like a greenhorn with a Beadie in my hands. Everything was different.

The successtory during 40 years is so extensive that I could write a book about this chapter only. Actually our dogs have won everything that can be won in Europe at the top. Many, many Best in Shows, countless Group wins at all the important shows in Europe, but also in Israel and the USA I was and still I am succesful.

One of the ultimate highlights was the first Res-CC in England at the famous Crufts with “Ch. Firstprizebears Vancouver” in 2001. To win with him the first CC in the UK was a thrill and to make him the first UK Champion who lives overseas kept me on cloud nine of ages.

But to win the dog CC at Crufts in 2005 with our topwinning Ch. Firstpizebears Apache” was just like a dream. Still getting in tears if I see photos of this moment. But also in the past we had so great moments with “Niagara Falls” winning Best in Show and the groupwins at the Amsterdam shows are very special to us,

My principle attached to the showing is: “A champion is only a champion when he is as good inside as he is outside”, meaning his hips should be A or B, his eyes should be clear of inherited eye-diseases, he should not have undergone surgery on OCD or something similar, in a few words: only a healthy champion is a real champion!

It is almost 20 years ago that we had our first litter. During the many years 88 Bearded Collie champions, have proudly and successfully represented us worldwide at numerous shows. 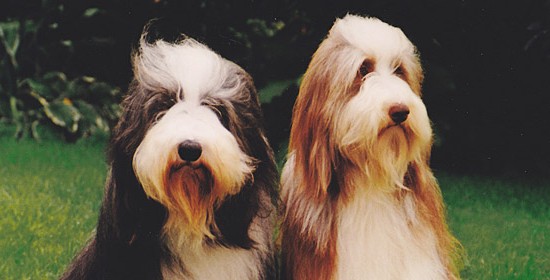