Beardies where not part of my life. In the seventies you hardly saw more than 1 or 2 of them at a show. These where, beside some, of no interest to me.

A beautiful Bitch was Schmerfelds “Cannamoor Rustina Gold”. Every now and than I met Mrs. Schneider-Louter and her “Warwinkel” Beardies, who where nice to watch.

Finally in July 1985, I saw an astonishing young male who had an outstanding movement. This was during a show in Doetinchem, the Netherlands and this Beardie was no less than “Shilstone Choir Boy” called “Bo”. On this day he won the group over my Bobtail bitch and became Best in Show. From that moment on he was my dream dog and this is, until today, still my example of how a beardie should look like.

In 1988, I started, what would later become one of the most famous Bearded Collie kennels besides my already famous Old English Sheepdog one. After we bought Bo, I also bought Bo’s halfsister Ch. “Shilstone Secret” and later on her litterbrother Ch. “Shilstone Diplomat”. Managed to get a mating between Bo’s sister Ch. “Shilstone Harmony” and Diplomat and bought a puppy from this litter: “Woolly Pad’s” Firstprizebear. From Denmark, Ch. “Kupid’s Pride of Debora’s Farm” returned and I also bought one of our most famous brood bitches, Ch. “Sheepish Prizebear the First” (mother of 10 champions). With a male from, France Ch. “Inpetto Du Blason de Kerlan” , I managed to get succesful combinations.

Our first Beardie litter was born in 1989 in Almkerk/Netherlands. Only 2 puppies where born, exactly as my first Bobtail litter in 1973.

To me, Ch. “Pepperland Lyric John” together with our “Bo” are the ultimate as far as Beardie males are concerned. The unforgettable Best in Show Winner “Potterdale Classic of Moonhill”, was a apparition with a tremendous charisma. In the meantime we have excellent Beardies who wrote history themselves, like Firstprizebears Dakota and her brother “Dennehotso”. A very special litter was the H-litter in 1993, who gave us our so successful “Hillary Clinton” and 6 more champions in this litter. She herself was the mother of Ch. Firstprizebears Very Brown, who also became a very famous brood bitch. Her history can be found on these pages.

Her Brother Vancouver was the first English Champion, living on the main land and by the way won Res CC at Crufts in 2001. That was Beardie history. “Laura” (“FPB Very Brown”) gave us the ultimate Beardie in every way. Our “Apache”was a dream in all parts. He has stolen my heart and together with him, I had my most fabulous moments during shows. He won CC at Crufts in 2005 and this has, until today, not been beaten by any other Beardie from outside the UK . Winning 4 CC’s in the UK made him our 2nd English Champion. This was done in no time with only 4 shows. Three times in row he became European Champion with BOB in Bratislava 2003, Barcelona 2004 and in Vienna 2005. He really was something special.

Our “Z’Tampa” is also a special Beardie Lady, who is always walking around with up to 3 balls in her mouth and still manages to bark. As Showdog… a sensation who won everything you can imagine. In her footsteps came het daughter “Donna Summer”, who showed herself as a Grand Dame and became a wonderful mother and give us our Hitchkock and Helen Hunt. Everything else is future. 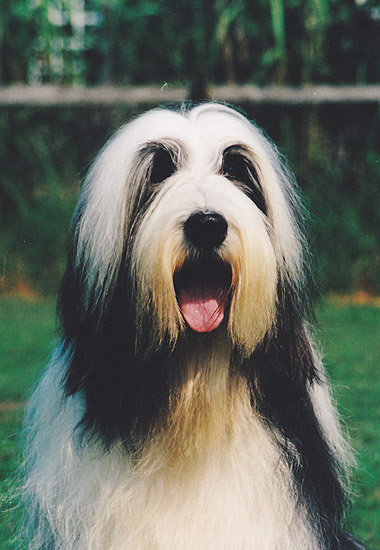 Breeding for more than 20 years gave me some nice pictures and memories of lovely dogs. Please allow me to share these with you.