A number of special exhibitions are being organized in Germany again. On the weekend of 10 / 11-7-2021 the German Bearded Collie Club organized a double CAC Show  with a club show in Alzey. On the first day Mr. J. Hartig / GER judged  and on the 2nd day the German all-rounder Mr. Dr. Peper.

The Knuchel family came from Switzerland with “Paddy”. He has already won the club winner title here twice. The champion class was very strong with 5 to 8 males. He won these difficult classes on both days. He then became Res-Best Male 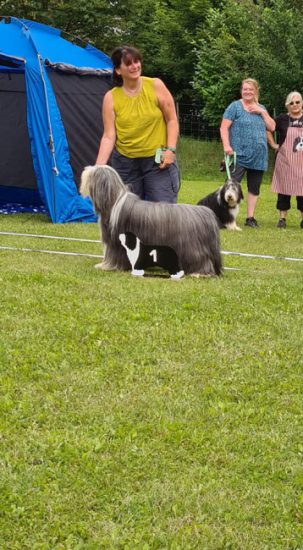 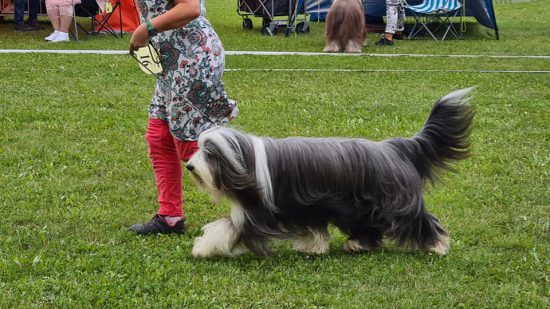 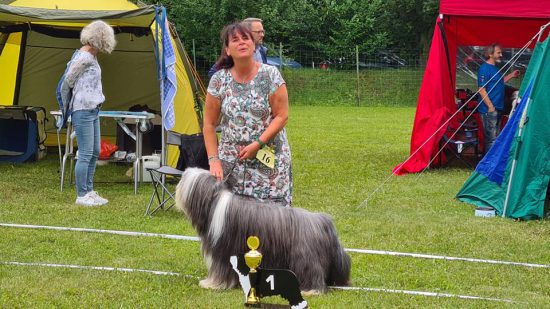 The van Bossche family brought “Tobi” with them. He is now 10.5 years old and still in great shape. He was Best Veteran on both days 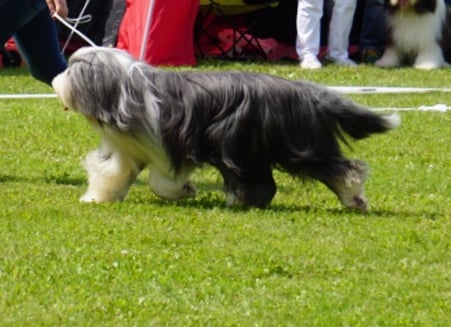 FINALLY there are exhibitions in England again. Althea Richardson couldn’t  exhibit her “Firstprizebears San Francisco at Caramac” at all while Covid times. “Frankie” is already 23 months old. Sue Bird / GB judged the Bearded Collies at the East of England Show on July 11th, 2021. Althea and Frankie won the Yearling Bitch and the Novice Class over 10 bitches. I’m so happy for them both. 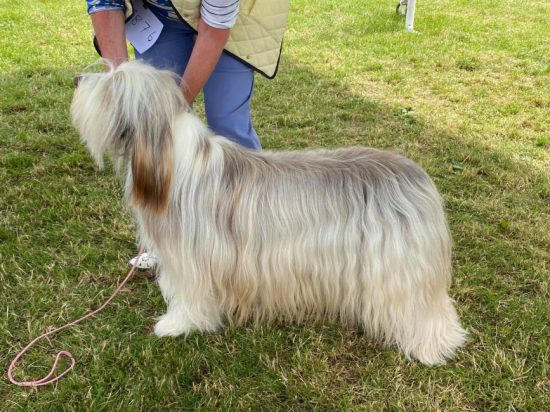 Frankie and Althea are in the middle 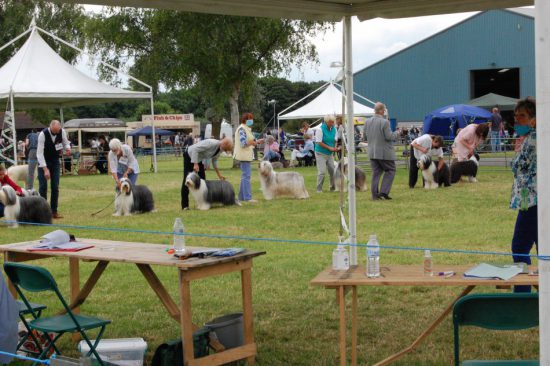 July 11th, 2021 Club für Birtische Hütehunde had organized a show in Gelsenkirchen on the greyhound racecourse. It was originally intended that  Ms. Heidi Müller should judge. That was changed after the registration deadline and it was now Mrs. H. Bilsheim / GER. Since we don’t like each other I thought for a long time whether I should even show my Bobtails to her. My Bearded Collie friend Monika Fuss had also asked me for advice on this and I gave her my honest assessment.

Conclusion: I shouldn’t have given this chance and it will never happen again that I show under this judge.

That was the only decent photo I have. 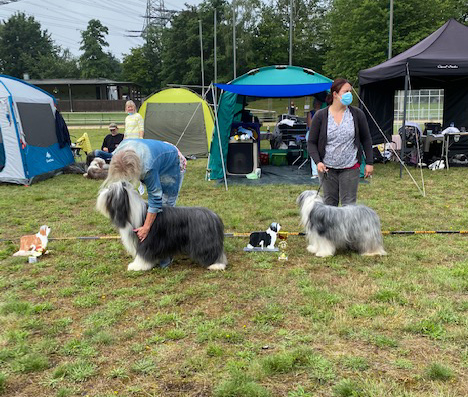 Our dear Mrs. Cocozza made herself on July 25th. from Braunschweig on the way to Pohorje in Slovenia. There was a double CACIB show. Her  “Ella”  Ch. Firstprizebears Q’Walnut Creek” needs a 3rd country with CACIB to get the title International Champion. On the first day the Croat Mr. J. Mijatovic and on the 2nd day Ms. L. Oklescen from Slovenia judged . “Ella” won the champion class with CAC, but unfortunately had to admit defeat against the open class bitch and received the Res-CACIB. 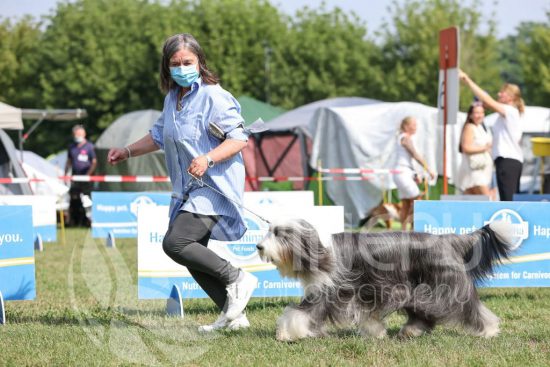 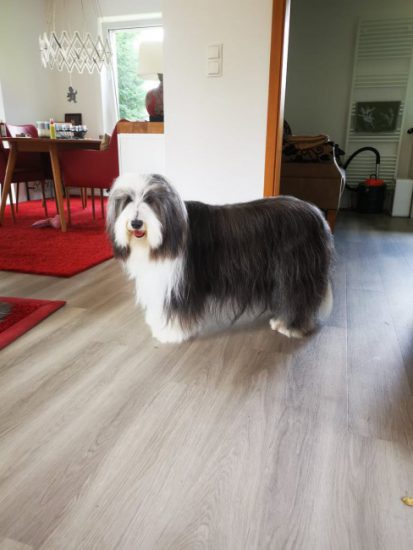 On July 18th, 2021 our Marita Gintere was on the way from her home in Riga / Latvia to Austria. A short stopover in Bydgoszcz / Poland for an exhibition was a must. Her “Jenny” Ch, Firstprizebears Q ‘Jennifer Lopez “had strong competition. The judge Mrs. Stolovska / Poland was convinced by Jenny and made her the best of breed with CAC and CACIB 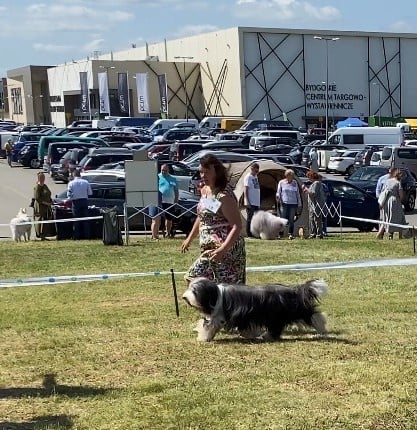 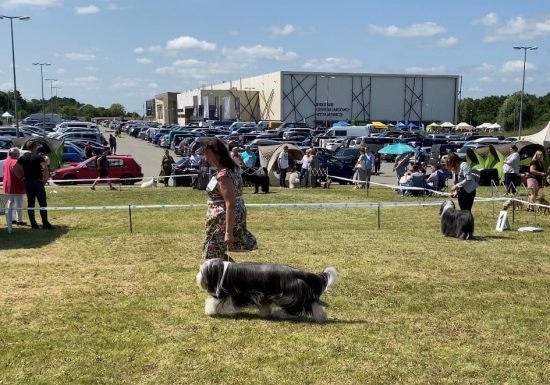 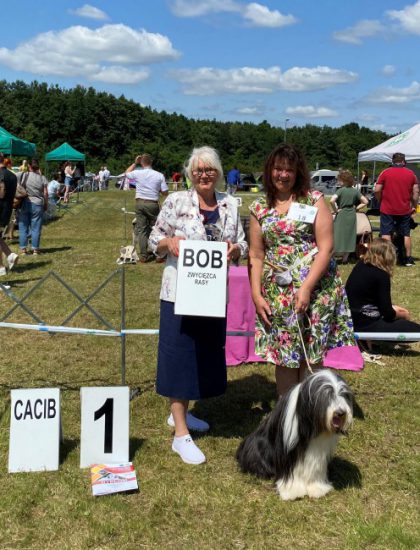