It is very calm in January.

Only in the south was Visitation Echiveirra traveling from northern Spain to Porto in Portugal. Firstprizebears Robin William became Best Junior of the breed and his sister Firstprizebears Rihanna Best Female. Both won the title Junior Latin Winner 2020. Judge was the well-known all-round Mr. Dan Eriscon / GB On January 18, 2020, the well-known and valued all-rounder Mr. Laurent Picard / CH judged the Bearded Collies in Milano / Italy. Ms. Knuchel had traveled with her “Paddy” to this show and this time had to go into the ring herself. It went well and “Multi Ch. Firstprizebears Patrick Duffy “won  best of the breed against very strong competition from France. The icing on the cake was the victory in Group 1 under judge Ms. Rossier from France. It is  certainly a great success if a very famous breeder from France is as a competitor with you  in the ring.

On the second day, the well-known breeder and judge Johann Anderson (Alistair  Bearded Collies) from Sweden judged. Unfortunately, “Paddy” had were limping and he was not able to be presented.. Such a pitty , but nothing to do. Sunday was the special show for Britishsheepdogs in Verl / GER. The Frenchman Mr. Claude Ritter had a bad day. He gave the champion bitch of Ms. Cocozza “Ch. Firsprizebears Q’Walnutcreek “a very good 2nd place. She was shown in the champion class. Mr. Ritter found that she did not have a typical rib cage that was too round. All other judges had a different opinion and just praised the good ribcage.. And only 14 days later on 9-2-20, Mrs. Cocozza went with her “Ella” to the Int. Exhibition in Fredericia / DK. The Swedish judge Mrs. Camilla Karlsson judged “Firstprizebears Q’Walnutcreek” andshe won CACIB, CAC and the Danish Champion Title. So now Ella is not a very good dog anymore, but again Excellent as always. Visitation Eccehvira was with Robin and Rianna on  23-2-2020 at the show in Valladolid / Spain, judge was the Irish Mrs. J. O’Connor. Firstprizebears Robin Williams was Best Junior  and 3rd Best Young Dog of All Breeds. His sister “Firstprizebears Rihanna” became best junior bitch. 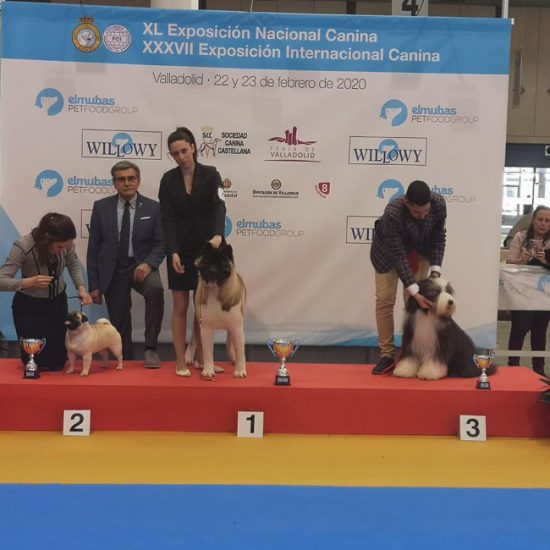 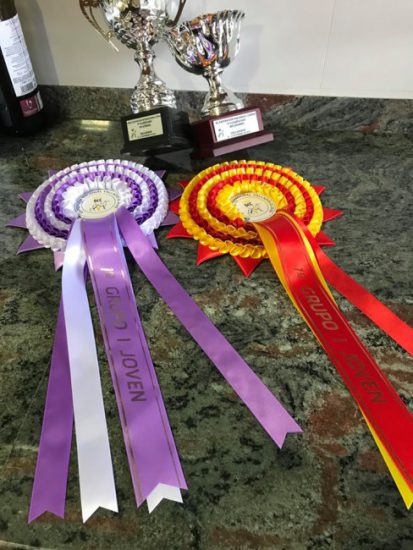 On February 22nd, 2020 a new Firstprizebear Bearded Collie Champion was made up: it is number 118 and it is the young female “Firstprizebears Q’Kim Kardashian” owned by the Hellwig family. She is a daughter of Ch. Beardmarked Sighn for sore eyes and our beautiful “Prada” Multi Ch. Firstprizebears Meryl Streep. It is the 6th Prada champion child. Her sister Q’Jennifer Lopez is also a champion and 4 older full siblings as well. 2 more siblings will also finish their championship titles this year. Then there are 8 champion children from 2 litters with the same parents. That was a great combination.

Kim won the title German and VDH Champion at the exhibition in Buchholz / GER with the Irish judge Mrs. Butler. The Hellwig family has bought 8 or 9 dogs from me over several years,  ALL became champions. Thank you dear family Hellwig-Grammann for your trust. 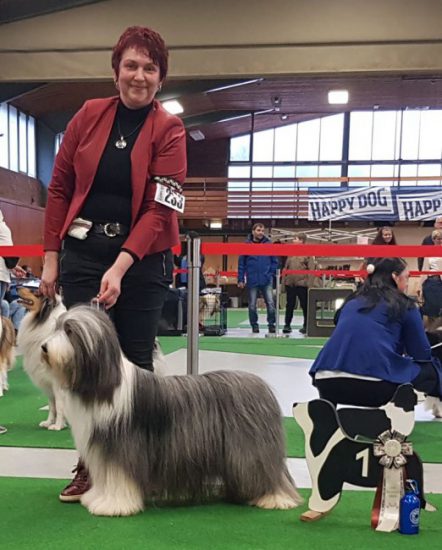