We were looking forward to the litter from Prada and Lasse, even though it was actually an “Oeps” litter. Prada had a nice baby belly. But then ……… As always from the 56th day the temperature is measured 4 times a day to see when it drops below 37 degrees. Actually, this is a safe indication that the birth will begin 24 hours later. Not so with Prada. The temperature on the 59th day was 38 degrees and Prada was sleeping soundly, nothing to indicate that she would have her babies. I slept on the couch in the living room so as not to leave Prada alone. At some point in the night she gave birth to 2 puppies without my noticing. When I woke up at 5am to check on her, I saw the 2 dead pups to my horror. Stay calm and act was the order of the day. Then waited and waited and nothing happened. At 8 o’clock I drove with her to the vet, took an echo and an X-ray photo, 3 and 4 puppies were clearly visible. Drove back home and waited. But nothing happened. In consultation with our vet, Prada was given a contraceptive, and an hour later a beautiful male was born, but he was dead. I was desperate and was afraid of losing the other puppy, which I could clearly feel in Prada’s stomach. We waited and injected another medication, but it had no effect. Prada just wasn’t in labor.
Good advice was expensive. We decided to have a caesarean section. That happened at 1 p.m. and 2 healthy puppies were taken out. The uterus was clean and tidy, nothing that gave cause for weak labor. We had a male of 280 grams and a female of 240 grams. Everything was actually good. We were happy and relieved and went home with Prada.
The whelingbox was now clean and tidy again and Prada and the puppies were happy in the litter box. BUT …… the puppies didn’t want to drink and Prada’s nippels were big and full of milk. Again and again I tried to put on the puppies. Temperature measured of the puppies, which was much too low only 32, o. Panic!!!! Warming plate on stand 10, the red lamp of 240 watts hung lower to get the puppies warm. That worked after a few hours, the temperature was at 36.5 and 37.0. But they still didn’t want to drink.

Long story in short: in the first 3 days the puppies were tube fed  every 3 hours because they were down to 210 gr and 260 gr and had lost weight. Prada’s nippels were full only nobody wanted to drink from them. After 3 days, the 2 finally drank from the bottle. Every now and then applied to the nippels. Now our 2 puppies finally gained weight, we continued to bottle every 3 hours day and night. Everything went well and on Friday 11-12-2020 they were one week old. Happyness came up.

That changed on Saturday, suddenly the male, who was always the bigger and stronger, no longer had pink skin, he looked a bit gray. Of course I thought it was because of my tiredness. His belly was big, although he hadn’t drunk much. He was calm, but something was wrong. I massaged his belly and gave him fennel tea with manuka honey. I thought he might be constipated. An enema with Microclist resulted in normal faces. I was scared and very worried. Driven him to the vet on Saturday evening. Our vet couldn’t find anything except that he had a big belly. He was given pain medication and an antibiotic. He didn’t want to drink anymore and a short time later he died. One week old …… everything was fine ….. and then just dead ……. I was devastated, infinitely sad and actually had no more strength.

However, there was someone who needed me, the girl!

She drinks from the bottle every 3 hours and gains weight really well. Prada’s nippels don’t give much milk anymore, but the little one lies with Mama Prada and sucks a little on the nippels and Prada takes care of her lovingly. On Friday, December 18th, 2020 she was 2 weeks old and tripled her birth weight. Today on Sunday the 20th of December 2020 she opened her eyes. Now and then she stands on her 4 legs and moves more. Her favorite place to sleep is on one of the 3 teddy bears lying on the warming plate in the whelingbox. I am  sure she become an alpinist one day because she always cracks up on the teddy bears. 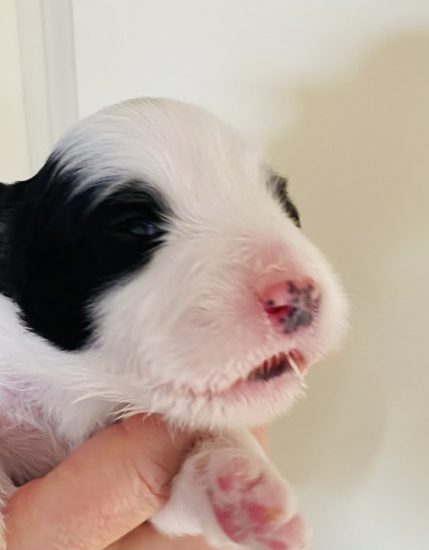 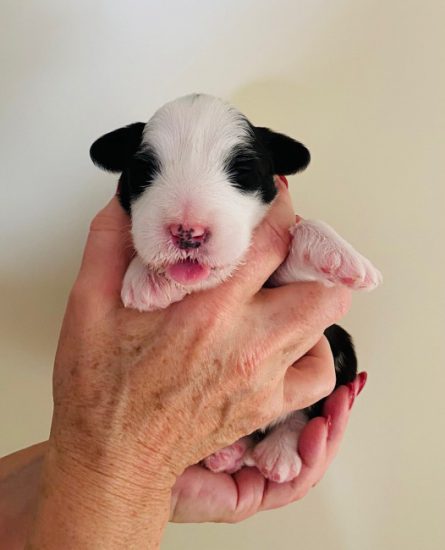 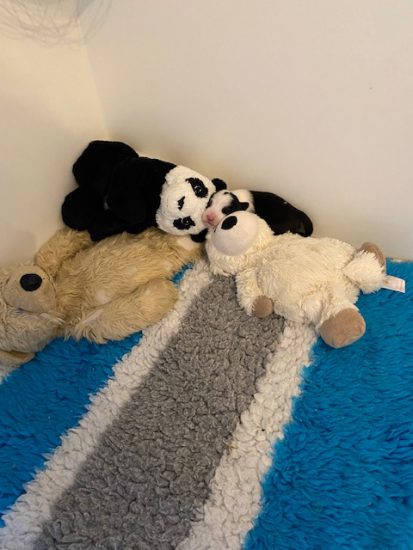 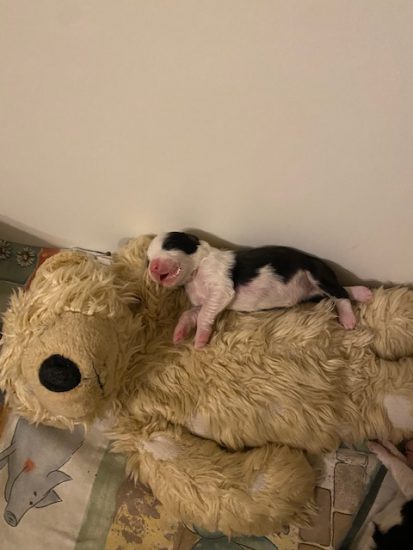 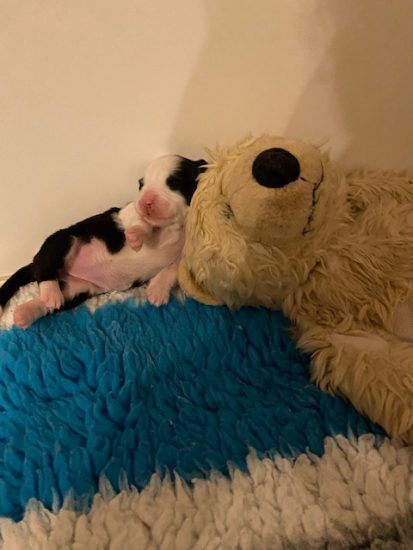 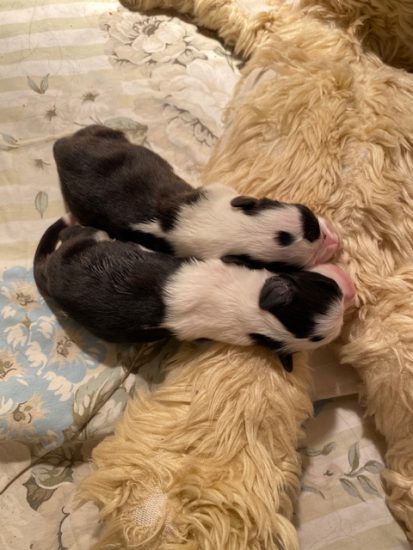 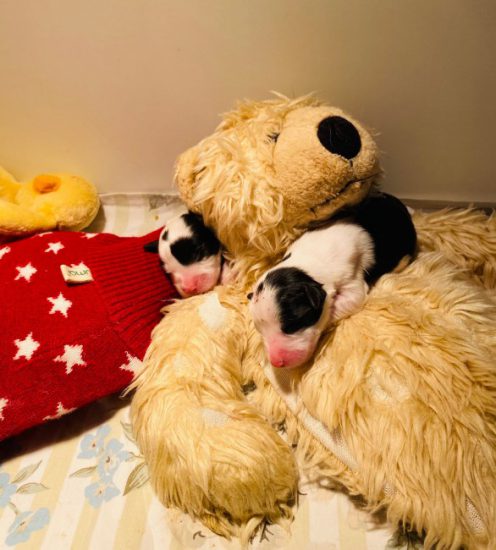 Our year ends with a big “OOPS”. On December 4th Prada surprises us with 1 pup from Lasse.