Lasse and Heidi in Gent/B

Since 01-01-2008 we have new rules in Belgium as far as breeding is concerned. You have to show under a Belgian Judge if you want to breed with a dog. This Judge than has to fill out a paper on which is stated that the dog had at least a Very Good and can be used for breeding. On 25-02-2012, Mrs. Bellinda DeRijcke judged and we had to show “Heidi Klum” and our new young male “Lasse”, who we bought in Sweden. His full name is “Lärkängen’s Firsticebear” and is now 10 months old. With mixed feelings we drove to the show. There is just a hand full of Belgian Judges under which we show. Mrs. DeRijcke was worth an attempt.

“Lasse” was toghether with another dog in his class and became 2nd. Exactly the same thing happened to “Ch. Firstprizebears Heidi Klum“.

Here the pictures Harry made.

and with his fellow contestor

Toghether with her opponent in the Championsclass 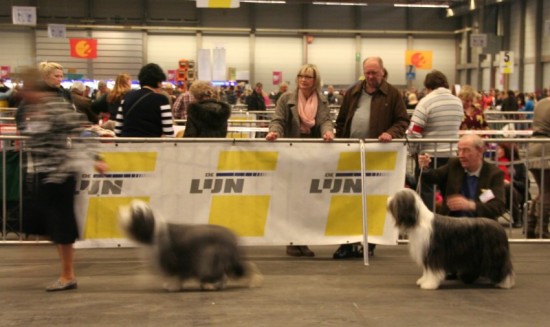