At the Int Show in Leuven / Belgium on 24.10 Xavier was with his beloved “Firstprizebears Percy Sledge” in the intermediate class at the start and won the 1st place. His brown father “Ch. Beardmarked’s Sigh for sore eyes” owned by Deborah Raquet took 2nd place in the champion class. “Percy’s” mother is “Prada” aka Multi. Ch. Firstprizebears Meryl Streep 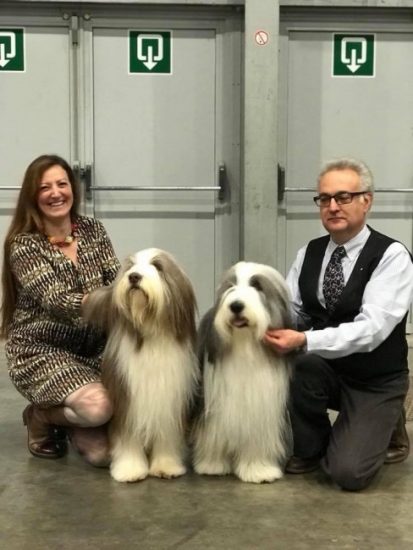 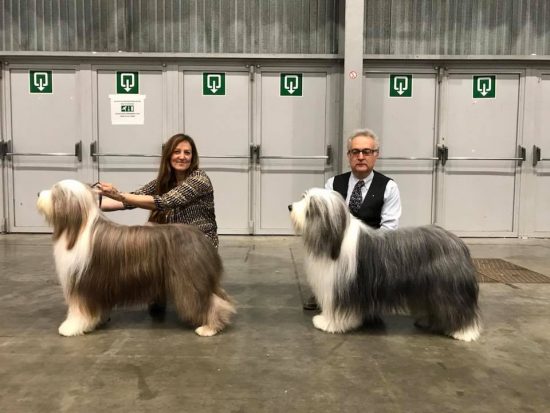 In Italy there was a double international show in Sedriano on 4 / 5.11. Family Knuchel-Bossel from Switzerland was entered with “Paddy”. “Firstprizebears Patick Duffy” is the Beardie who was suspended last year on the club show of the Swiss Bearded Collie Club by his former owner Mrs. Cornelia Lüthi. What a wonderful story that went so well for “Paddy”. He is now washed, brushed and presented excellently by my dear friend Fernando Sunye. On both days “Paddy” won CACIB, CAC, Best of Breed. On the first day he came among the last 6 dogs in the group 1. Judge on the first day was Francesco Cochetti / Italy and on the 2nd day F. Asnaghi also Italy 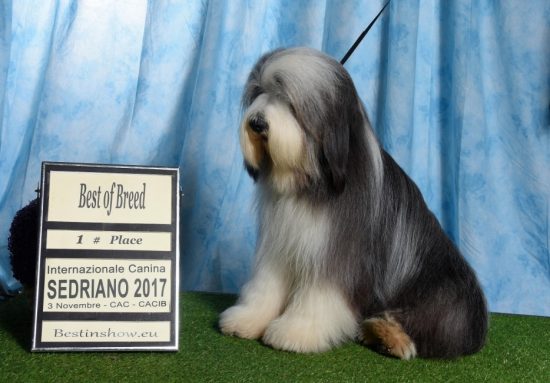 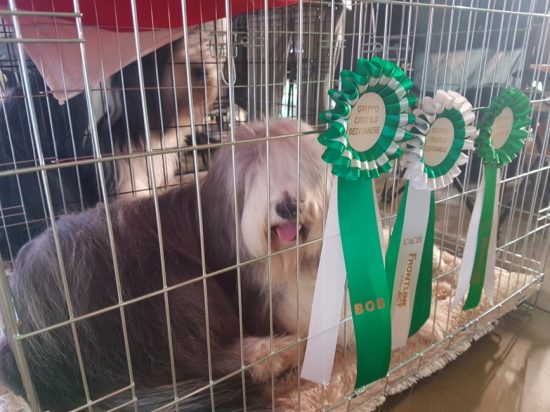 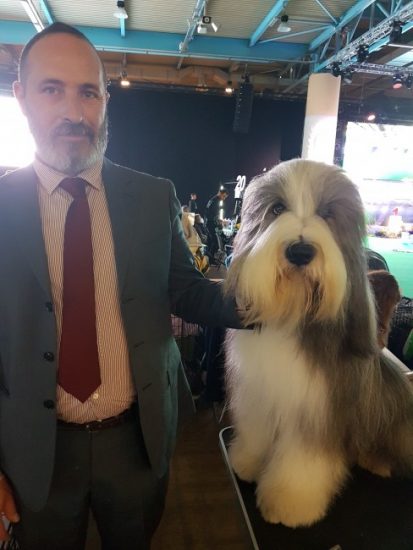 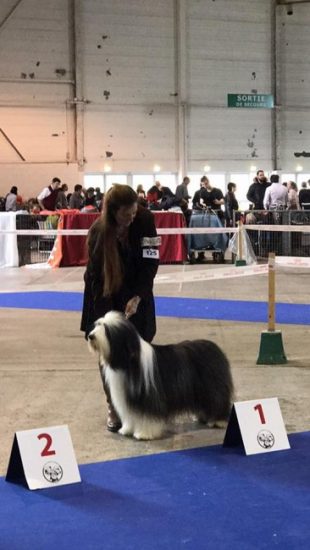 31000 dog from around the world, including about 130 Beardies for the judge Laurent Picard from France / Switzerland. Unfortunately Fernando from Italy could not come with the beautiful “Nora Jones”. That would have had great chances for the world title. But our other Beardies have done very well. Ch. Firstprizebears Neil Diamond was selected in the Open Class, who was 20 male, among the last 6. Family Kirmis was in the intermediate class with their “Firstprizebears Pasadena” and was placed on the 2nd place with Res-CAC by 7 females. This great performance has also shown on the German Winner on Wednesday. There with the judge Mrs. Langhorst / GER. I’m so proud of “Sally” 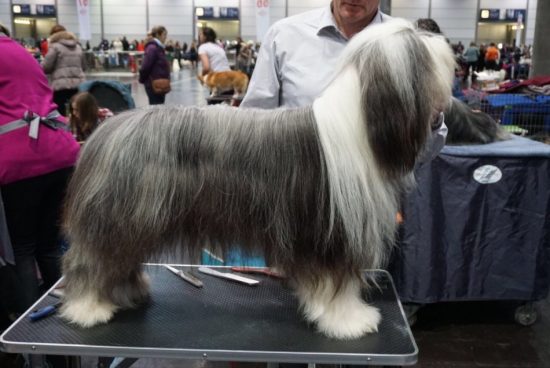 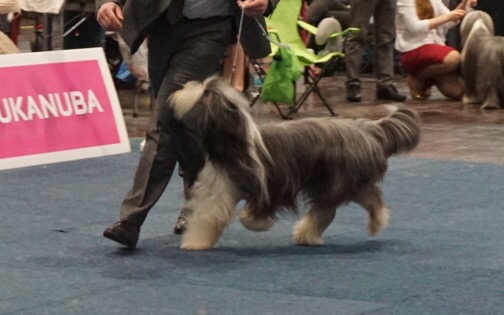 and then Ms. Hähner came in with “Scotty” Firstprizebears Pat Boone “the young superstar, he was in the intermediate class males at 6 and won that class with CAC. 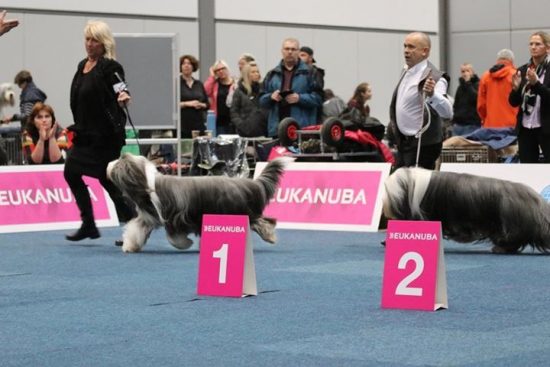 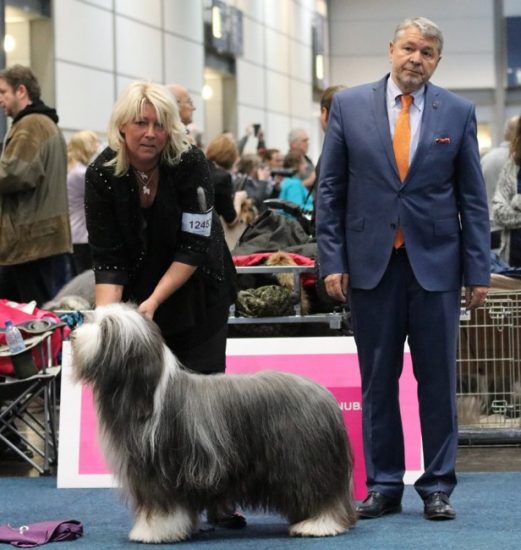 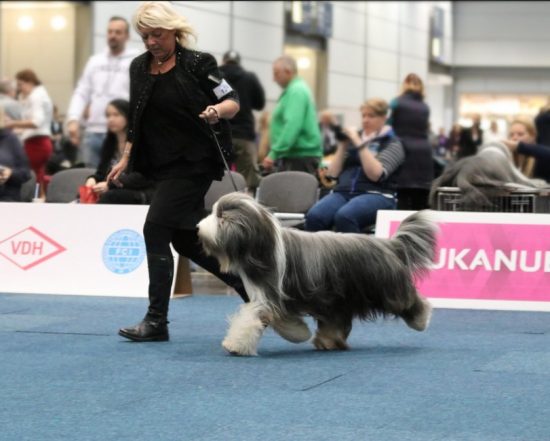 A somewhat sad world show was for the Hellwig Grammann family. They had registered their beautiful old lady “Willa” Ch. Firstprizebears Greenville in the veteran class. Sadly, Willa had developed a malignant canker in a very short time. To spare her pain, the Hellwig family had to put her to sleep 2 days before the World Show.

On Sunday 12-12-2017 Monika Fuss was on her way to the Netherlands for the club match of the Dutch Bearded Collie Club in Wijchen. Here, Wendy Hines of the Ramsgrove Beardies judged the 57 registered dogs. Firstprizebears Pikes Peak (he’s the litter brother to Pasadena) was in 1st place in the intermediate class 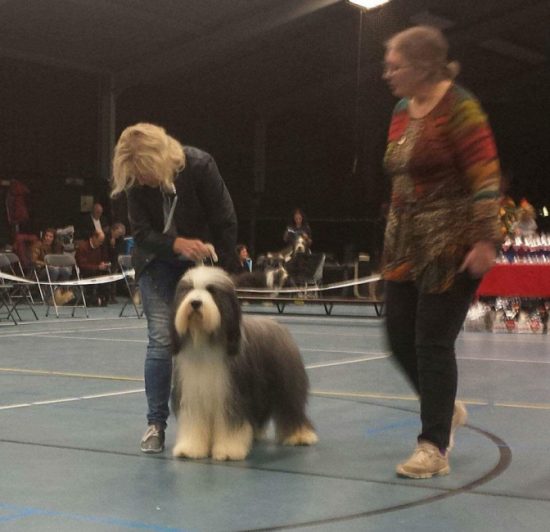 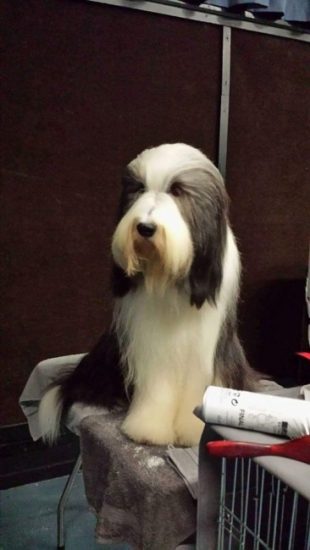 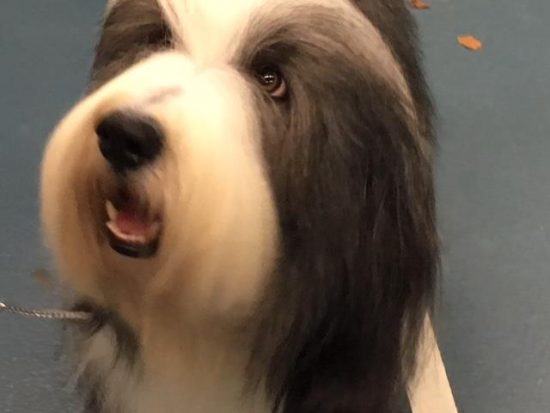 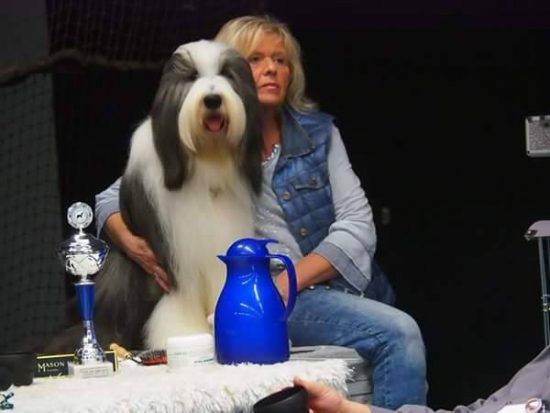 There is again a new Firstprizebears champion, number 107: it is “Firstprizebears Oscar de la Renta” (Ch.Lärkängens at Firsticebears x Ch. Firstprizebears Jade Jagger) owned by Mrs. Yonne Müller from Switzerland. He won on 19-11-2017 at the Int. Show in Geneva / CH 4. CAC and is therefore “Swiss Champion“. He is a litter brother of “Orlando Bloom”. Congratulation from the proud Belgians