Belgium–Barcelona and back: 2900 km/1800 miles, all by myself because nobody was able to join me. On top of that, they had changed the judge for Beardies, it now was Mr. Jack Bispham/UK. Otherwise I would have left my Beardies at home and flown over to handle our OES Superstar Int., NL, A, HU, SLO, D, VDH Champion Zecret Zorro aus dem Elbe-Ur­strom­tal, for his owner Mrs. Márti Buday from Budapest. Everything went wrong!

Shortly before I planned to leave it started raining cats and dogs, 3 hours long and the rain eventually accompanied me for the first 400 km. Next morning, in a hotel near Lyon at around 6:30 AM I was woken by a sound that was immediately clear to me that either Patch or Tampa (the 2 Beardies) had diarrhoea! It was Patch indeed who left his diluted message on the tiles in the bathroom. Early morning wake up call!
After arrival in Barcelona I had to wash 8 dogfeet and get rid of about 3000 little balls that we picked up in a parking lot in France and was now stuck in their coat.

Who haves the papers?

Then finally it was time to meet Márti Buday and Zorro for dinner at the poolside. She had arrived with her son and a friend after travelling 1750 km (1000 miles) but without any trouble. Zorro was well prepared for the show the next day. Then Márti asked the in this case decisive question: “Do you have my papers for tomorrow?”. I said: “No, because it was you who entered him”. At this moment it became clear to both of us that Zorro was not entered, not in the catalogue and would not be able to compete the next morning!!! We nearly fainted, Zorro was not upset at all. I was pondering between the drowning myself in the pool or leaving immediately to go home. Both ideas were not so interesting, only one thing could help: Schnaps! I never drink this, but we all had 4 double Brandies. Luckily this softened the situation and we even started to laugh about this disaster and the fact that Márti could start driving back home, again 1750 km, without having shown her Zorro. I went to bed, tired and disappointed (and a bit tipsy).

A dark start of the day

I woke up at 5.00 am, and tried to switch on the light, nothing… everything remained in darkness. Was it the 4 brandies? No, they just had an electricity problem. I went down to the porter who stated that he couldn’t do anything. I proposed to him that I would go out with the dogs for 30 minutes and that there had better be electricity when I returned otherwise he would be in severe trouble! My warning seemed to work!

Parking near the exhibition halls was a disaster, but I was lucky to enter the hall from the rearside. I found my ring, got everything settled, had a quick look in the catalogue, perhaps Zorro was in; no way. I discovered that another Joker from us was entered: Ch. Z’Bushy­bear aus dem Elbe-Ur­strom­tal, owner Noelia Galisteo from Spain. It was 10 o’clock, judging was supposed to start at 11:30 and there was still no sign of Noelia with her “Patsy”. I started to panic slightly, imagining that she too would not be there. But finally Noelia and Patsy arrived. Now we could concentrate on the show itself and everything went much better than we had thought. Under judge Christoffer Habig/D Patsy got BOB and a youngster living in Spain, Cockpit aus dem Elbe-Urstromtal, got European Junior Champion. Under Beardiejudge Jack Bispham Tampa (Int-Nl-B-Lux-VDH-D-Ch., Worldwinner, Winner Amsterdam Firstprizebears Z’Tampa) won BOS and Patch (Int-Slo-CZ-NL-Lux-Ch. Winner Amsterdam, Bundes & Europa­sierger Germany, Europeanchampion 2003 & 2004 First­prize­bears Apache) BOB, so who could complain?

The ring of honour was the icing on the cake, a happy end to this disasterous event. Patch was selected under the last six in the group and Patsy won Reserve Best in Group. This European show was nearly a repeat of last year’s show in Bratislava: Patch BOB and selected, his sister Aspen BOS and Zorro BOB and Best in Group. Also Bratislava started with a disaster, as the night before we left we had burglars visiting our second house located 3 meters away from the main house. My husband Joop thinks that it is a good omen if some little disaster happens before a show! 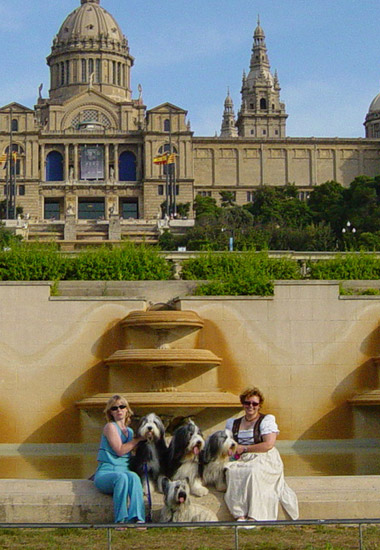