After having spent his first year with his mother and sister at the Nicholsons his sister went to Germany. Together with his mother he was entered at some shows in England, with very good results. Because of his abundant beardie temperament and his strenght Bo was a handful for the poor Mrs. Nicholson. The results was, that he often was placed second with the remark that he could have won if he had not behaved like a jojo.

His nickname became “Naughty Boy”. It was clear that Bo could reach the top if he was in the hands of a strong handler who could train him to behave properly.
So it happened. When he was 20 months old he came to Holland and was trained by Joop. After a while it was clear to Bo that Joop was the strongest and he decided to behave like a real showdog, at least at the first shows. 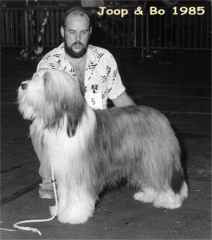 His first show was in Hamburg, the judge was Beverly Cuddy (Dearbolt). She had judged Bo before in England and regretted his jojo-behaviour. Here in Hamburg she saw a totally different Bo, who behaved like an experienced showdog. Without any hesitation she made him Best of Breed and gave him the nicest compliment he ever got: she called him “a Lyric John in slate”. As Lyric John was brown one can imagine what a compliment this was.

This show was the beginning of a dreamcareer, he became the most successful Beardie in Europe all times and one of the most successful showdogs anyway. He won 15x Best in Show at international all breed shows in Germany (e.g. Dortmund), Holland (e.g. Winner Amsterdam), Belgium, Luxemburg, France and Denmark. He gained the following titles: INTernational/Dutch/German/VDH/Danish/Belgian/Luxemburg/French/USA and CAN Champion, as well as twice Worldchampion. In his country Holland he made it to Top Dog all Breeds and Dog of the Year, in the same year 1986. One year later he became again Best Dog of Group 1 and Reserve Top Dog all Breeds.

When he later on appeared in veteran class he was still a very good looking old man who was still able to get the BOB in spite of all the youngsters. In Denmark he even became Best Veteran all Breeds.
All these breathtaking showwins are only half the reason why this dog became a legend. The other reason is his extraordinary inheritance.

Bo is sire of 59 Champions all over the world, a lot of them followed in his track and won innumerable Best in Shows and Champion titles. He did not only pass on his outstanding appearance to his offspring, but also his peerless temperament. His sons are as fond of children and puppies as their father, besides that they inherited his libido and proved themselves as excellent producers.

A real Bo-child has complete command of the three elementary tailmoves: up/down, left/right and swinging around. Mostly they do these 3 figures at the same time! They also can do “little woofies”, but only with a cookie as reward. His “Royal Highness” dragged always a rubber-squeak-cucumber wherever he went, even on his last day when he was old and tired and had to leave us behind, much too early although he was already 13 years old.

We allowed ourselves to bury our once in a lifetime Bo in the frontgarden of our Highlands, together with his rubber-squeak-cucumber.